The Junction is one of Toronto’s most hip neighbourhoods. Well known for housing a multitude of breweries, restaurants, cafes as well as boutique retail shops and galleries, it is no wonder that many looking to buy a semi detached home in Toronto are highly interested in The Junction neighbourhood.

Located in the west-end of Toronto, the core of The Junction is outlined by Runnymede Road on the West, Annette Street on the South, Dundas Street on the North, and Keele Avenue to the East. The Junction neighbourhood is an ideal base, providing easy access to major arteries and transportation networks, as well as being in close proximity to some of Toronto’s nicest parks and recreational areas.

The History of The Junction

The junction started out as a railway town on the outskirts of Toronto in the 1870’s. Numerous railway lines merged in the area, which in turn attracted industry, subsequently leading to a growth in residential development as workers looked for housing nearby. Many of the homes off Dundas Street and throughout The Junction were built during this early development of the area.

Excessive drinking and rowdiness led to a prohibition of alcohol sales on Dundas Street West in 1904. The prohibition lasted nearly a century until it was finally lifted in 2000. Today, The Junction is arguably Toronto’s hub for craft beer, and is home to upwards of 10 craft breweries.

Restaurants & Retail in The Junction

In addition to the craft ale scene, there are a plethora of trendy restaurants, cafes, and retail shops scattered throughout The Junction area. The Stockyards is another retail hub located just North of The Junction, providing convenient access to numerous big box retailers.

Parks & Recreation in The Junction

The Junction is also in close proximity to some of Toronto’s best parks and recreational areas. These include; The Humber River, Humber Bay and High Park, as well as several smaller local parks and facilities. 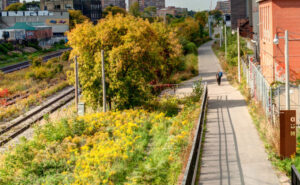 In 2009, the West Toronto Railpath opened, providing a direct link for pedestrians and cyclists from The Junction to the Dundas and Lansdowne area. There are plans to eventually extend the path farther south to the Liberty Village neighbourhood. The close proximity to these outdoor recreation areas is just one of the reasons houses for sale in The Junction are highly sought after.

Getting around The Junction

In addition to its links to Toronto’s cycling network, The Junction is also well situated within the TTC grid, and is close to major highways, making it an ideal location to buy a home in Toronto. Whether you need to head into the downtown core, or want to escape the city for the weekend, residents living in The Junction are well poised to do so.

Schools in The Junction

Many looking at houses for sale in Toronto are also keenly interested in the availability and quality of nearby schools. Elementary schools in The Junction area include;

The Junction started out as an industrial rail town nearly 150 years ago, but in that time, it has evolved tremendously. The Junction is well situated, with many outstanding amenities and resources nearby, and is now one of the most desirable residential neighbourhoods in Toronto.