Alderwood, formally known as New Toronto Heights and New Toronto Park, is located in the South-West region of Toronto, within the district of Etobicoke. The name “Etobicoke” is derived from the Mississauga word wah-do-be-kang (wadoopikaang), meaning “place where the alders grow”. Thus it is easy to infer as to how the name Alderwood came to be.

With a strong family presence, great schools, and close proximity to Etobicoke Creek, Humber Bay and numerous other parks and recreation facilities, Alderwood is the ideal setting for both families and people who are looking for a home in a serene environment within the Greater Toronto Area.

The History of Alderwood

Alderwood was originally inhabited by the people of the Mississauga First Nations. Once the British settled in Canada, the area that is now known as Alderwood and neighbouring Long Branch, became property of loyalist British army officer Samuel Bois Smith.

In 1850, four farm lots, which now comprise the area of Alderwood, were partitioned and sold to Archibald Cameron. Cameron built his home on what is now Beta Street. Some 25-years later, Cameron sold the land to Daniel Horner. Horner would later serve as a prominent member of Etobicoke Township’s Council.

In the 1920’s, development of the area increased and the Alderwood area merged into the town of ‘New Toronto’. In the early 1930’s, the area became a postal village within the Etobicoke township. Finally between 1940 and 1960, the area saw a massive increase in new homes, industry and population as the post WWII baby boom and wave of European immigrants arrived in Toronto.

Alderwood has a wide assortment of dining options and retail locations, many of which are found along its two main streets, Horner Avenue and Brown’s Line. Additionally, the enormous shopping center Sherway Gardens is located just north of the QEW, within a stones throw of Alderwood. The Dixie Outlet Mall is also less than a 10-minute drive away. 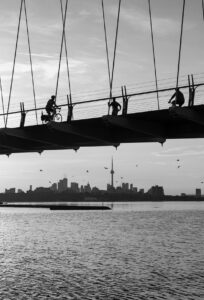 The parks and recreational facilities located in and around Alderwood might be the neighbourhoods largest draw for potential new home buyers. The entire westerly border of Alderwood runs along Etobicoke Creek, which has many beautiful parks and paths to explore.

Some of the notable parks and recreational facilities in the Alderwood area include;

Additionally, Alderwood is located just a few minutes north of Lake Ontario and The Humber Bay. The proximity to the lake obviously offers a plethora of additional outdoor recreation and activities for homeowners in the area.

Although Alderwood is not located centrally within Toronto, it is well connected via public transport, main thoroughfares and most notably, is situated at the junction of the Gardiner Expressway, 427 and QEW.

The area is serviced via multiple TTC bus routes as well as the Queensway and Long Branch streetcar lines which connect to the core.

For cyclists living in Alderwood, the Waterfront Trail also provides easy access to the downtown core.

Many looking at homes for sale in Toronto and Etobicoke are interested in the availability and quality of nearby schools. Alderwood is home to several highly accredited schools including;

Alderwood may not be in the heart of Toronto, but then again, not everyone wants to live in the center of a metropolis. For those looking for a home in a quieter area of the city, which is still accessible and well connected to the core, Alderwood is a great option.

Its close proximity to Lake Ontario and numerous parks and recreation areas makes it an ideal choice for people who love the outdoors. There is no shortage of restaurants and shopping options nearby, adding to the convenience of owning a home in Alderwood.

Situated at the foot of the QEW, Gardiner Expressway and 427 enables Alderwood home owners to quickly access the entire GTA in a matter of minutes. The Queensway and Long Branch TTC streetcar lines allow for economical, traffic free commutes into the core. While cyclists can easily hop on the Waterfront trail for both recreation and downtown commutes.

This family oriented community is an ideal neighbourhood for anyone looking to buy a home in Toronto. Urbinco is currently developing new homes in Alderwood. Please see our featured Alderwood home here, or contact us for information about the other new homes we are currently building in Alderwood.